Are They Any Good and Why Do We Need Them?

Having lost my mother to cancer, in spite of standard treatments available at the time, I’ve developed an interest in alternative cancer treatments. It’s also prompted me to include natural health as one of my writing niches. 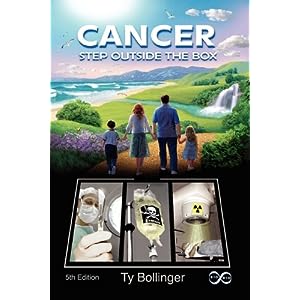 I’ve read a couple of books on the subject, and am currently reading the best of the ones I’ve read right now. The book, Cancer: Step Outside the Box is written by Ty Bollinger.

If you have cancer yourself, or know someone who has, or are just interested in alternative cancer treatments—this book is highly recommended!

Ty Bollinger is not a doctor, but just a guy, a CPA actually, who lost both parents and several other members of his family to cancer. These devastating losses, which occurred in spite of all the standard medical cancer treatments (the Big 3), prompted him to research and write about all viable alternative cancer treatments.

One hundred years ago, only approximately one out of eighty Americans got cancer. Today, after all the “improvements in cancer treatment” it’s one in three. It has been estimated that the year 2020 will have us at one in two Americans with a cancer diagnosis. Twelve percent of all deaths in the whole world are due to cancer. Here in the USA, we rank in the top three countries with the highest cancer rate in men and women.

These three treatments are better known in alternative circles as cut, burn, poison. These cancer treatments often cause disfigurements and always destroy the natural immunity of the human body. They can and often do actually cause other cancers to form. Although they have, on occasion, bought the patient some time, they don’t CURE anyone of cancer. The objective of the Big 3 is just to help the patient with the symptoms—not cure the cancer—and make a lot of money in the process.

There are a lot of people who die from the treatments and not the cancer itself.

Bollinger points out that most doctors, nurses and health practitioners are genuinely caring, sincere professionals trying their best to help their patients.

The problem lies in medical schools and what they teach. It seems that medical schools are largely funded by the pharmaceutical industry. So they have a say-so with what’s taught to the med students. And what they’re taught is what will benefit the pharmaceutical companies. They’re also taught to debunk anything alternative, that’s not taught to them in med school. So they start their career believing that a patient’s best chance is with the standard treatments.

Ty Bollinger found out otherwise, and chronicles in his book many different alternative cancer treatments that have been proven to work, and actually CURE cancers—without any disfigurement, loss of hair or extreme nausea.

In Bollinger’s words, “Open your mind to the possibility that you have been lied to and that there are much more effective cancer treatments than the “Big 3”. And the late Dr. Robert Adkins said, “There is not one, but many cures for cancer available. But they are all being systematically suppressed by the ACS, the NCI and the major oncology centers. They have too much of an interest in the status quo.”

Starting with my next post, “step outside the box” with me and explore some of these simple but effective cancer treatments, some easily available, some not so easy, but still available.