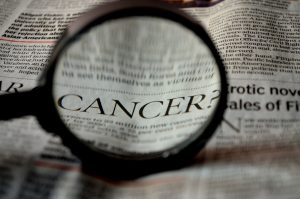 With a new diagnosis of cancer, if you choose to go the alternative route, there are certain things you should do. Eat a vegetarian diet, and especially avoid all sugar, and any carbs that turn into sugar in your body, like potatoes and bread, because sugar feeds cancer.

Find a wellness center that offers hyperbaric oxygen therapy, and start sessions of oxygen, because cancer is anaerobic and oxygen kills cancer. Or if you can afford it, buy your own chamber.

All these are good, and effective.

But now, thanks to fenbendazole, an active ingredient in a dog dewormer called Panacur C., there’s something else that works.

I know, a dog dewormer?! How was that discovered?

An Oklahoma man, named Joe Tippens was diagnosed with small-cell lung cancer, and not given much chance to live. The doctors immediately started aggressive chemotherapy, radiation, and an experimental drug that supposedly would add some time to his life.

Well, Joe reacted badly to the radiation sessions, and had to give them up. But he completed the chemo and the other drug.

His lung cancer stopped growing, but the PET scan revealed the cancer had metastasized to his bladder, pancreas, neck, his other lung and his tail bone. So the doctors put him on another experimental drug.

Joe went home to Oklahoma and contacted a veterinarian friend and found out about positive testing of a dog dewormer on cancer in mice. He also found out about one woman who tried the dewormer, and it cured her cancer in six weeks!

So, out of desperation, on January 15, 2017, he started on the dog dewormer, Panacur C, without telling his doctors.

His PET scan, in May of 2017, showed him all clear of any cancerous growths.

Joe still didn’t tell the doctors about the dewormer, since he wasn’t really positive whether it was the experimental drug, or the dewormer that was so effective.

After he was taken off the drug, a subsequent PET scan in September of that year showed he was still cancer-free. He asked the doctors about the experimental drug, and how many other patients had reacted well to it. He was the only one. No other patients had any positive effect with the drug. Joe then knew it had to be the Panacur C, that cured him.

He finally came clean and told the doctors about the dewormer. They then told him that the class of drugs in the Panacur C was known to kill cancer! He was shocked, and asked why it wasn’t used to cure cancer.

Of course, it was the money. The drugs were well off patent, and no drug company could make mega bucks off them. So no effort to bring something that really works to the public.

I personally know two people, right here in my little town in Missouri, who have had their cancer cured with Panacur C. One is a neighbor who told me about it, after curing his own colon cancer, and another, a friend to whom I told about it who had lung cancer. They are both now cancer-free and living life to its fullest.

I know the thought of taking a dog dewormer isn’t exactly appealing. But it WORKS!

These people I mention here in my small town are still taking the Panacur C, to make sure their cancer doesn’t come back. And Joe says he will take it the rest of his life.

Joe takes Panacur C made by Merck Animal Health. Using the package for small dogs (10 lbs.), which have three 1-gram packets (with 222 mg of fenbendazole each). He takes one packet for each of three days. He then takes four days off, and repeats the doses for three days. In this way, he uses one package a week.

Look for Panacur C at your Walmart store, or on Amazon. And I’m sure it can be found elsewhere.

Taking the four days off is to assure no liver or kidney problems can occur. But there haven’t been any problems noted. It’s just a precaution.

The doses can be taken with, or without a meal, and any time of day. The tasteless powder can be swallowed as is, or mixed with food.

So if you find yourself with a diagnosis of cancer, it certainly won’t hurt to try the something new, Panacur C. And it can be taken while undergoing conventional treatments too, if that’s your choice.

And if it were me with cancer, I’d do the other alternative methods, such as special diet, oxygen, and essiac tea along with the Panacur C.